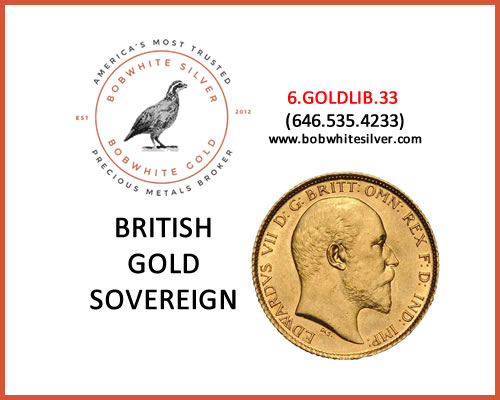 The British Gold Sovereign is a 22 karat gold coin of the realm of the United Kingdom. About the size of a U.S. nickel, with a gold content of nearly a quarter of an ounce (.2354 troy ounces), the “Sov” is one of the most popular, and widely distributed, gold coins in history. First issued in 1489, the modern coin known as the British Gold Sovereign was first minted in 1817. With a nominal value of one pound sterling, the sovereign was a fully circulating coin within Britain’s Gold Standard currency as recently as 1932. Today, it holds the distinction of being the only pre-1933 coin to carry over to the modern era.

These beautiful, and historical, gold coins portray the reigning monarch on the obverse and Benedetto Pistrucci’s design of St. George slaying the Dragon on the reverse. Pistrucci, Chief-medalist at the Royal Mint in England, created the St. George design in 1817. It is said that Pistrucci was offered the position of Chief Engraver, lived in a house on the grounds of the Mint and acted as the de facto Chief Engraver, but was denied that title because of his “foreign origin” (he was Italian born)!

The gold content was fixed at .23542 troy ounces by the coin act of 1816 and, other than minute changes to accommodate the metric system, the weight has remained constant to the present day. As a coin produced by a sovereign country, the British Gold Sovereign’s weight and content are guaranteed.

Over its long history, Sovs have been minted in Australia (Perth, Sydney and Melbourne), Ottawa Canada, Bombay, India and Pretoria in South Africa. Today’s coins are minted at the Royal Mint in Wales, and near Delhi, India. 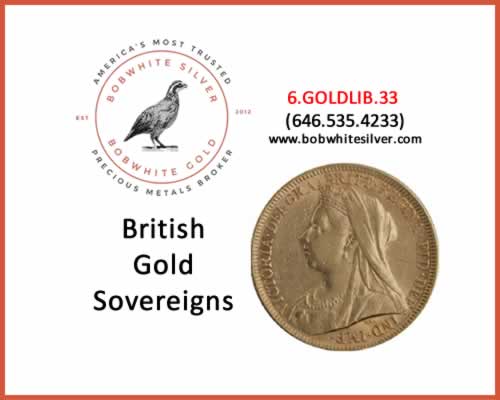 Commonly traded British Gold Sovereign coins are generally referred to as “Kings” (coins featuring an obverse depicting Edward VII or George V), “Old Queens” (coins featuring Queen Victoria) and “New Queens” featuring Queen Elizabeth. It should be noted that the term “New Queens” may refer to any “Sov” depicting Elizabeth and should not be confused with “current year” Elizabeths. In other words, if a dealer offers a “BU new Queen”, he could be referencing a coin as old as 1957! If you’re looking for a 2015 British Gold Sovereign, make sure the date is specified!

Coins are typically available as average circulated or BU (brilliant uncirculated). While not an exhaustive listing, the following coins are the versions most commonly found at popular retailers (like bobwhite silver) today:

All of the coins above feature Pistrucci’s St. George slaying the Dragon design on the reverse.

For all the info you could ever dream of about the British Gold Sovereign, and more, please visit Gold Sovereigns UK . I don’t know these guys, but I’ve visited their website many times over the years. They offer a wealth of information detailing the extensive history of this classic European coin.

Fractional European coins (coins weighing less than an ounce) like the British Gold Sovereign, and the 20 francs Swiss Helvetia, French Rooster and French Angel make for a wonderful investment opportunity. They’re highly liquid, they are “small denomination” and each coin is pre-1933*, so if you’re a believer that the government is going to knock on your door and seize your gold someday, you can argue that they’re collectibles.

Why buy from us?

At bobwhite silver bobwhite gold (BSBG), I bring over $1.6 billion in business experience to the trading desk. If you require a broker who, in addition to offering great prices and quick delivery on items like the British Gold Sovereign, provides you with that personal touch, offering patience, transparency and integrity, bobwhite silver is definitely a choice to consider.

If you have any questions about the British Gold Sovereign, or you’re ready to make a purchase, please call me at 6.GOLDLIB.33 (646.535.4233) seven days a week! No ever-changing bunch of guys in cubicles, no, “please listen as our menu options have recently changed”, no “dial 9 for a company directory”, just me, Joel (bobwhite is a bird).